Welcome to a new addition to the blog called the Top Tipple Review. With these reviews I plan on reviewing all of the amazing once-in-a-lifetime samples or bottles that I’ve managed to get my hands on throughout the years. Many of the whiskies that will be featured will either be very far out of the typical bourbon drinker’s budget, very hard to find, no longer be available outside of auctions or personal collections, or a combination of these. I’ll probably never get a chance to try any of these whiskies again, and I cannot think of any better way to enjoy them than to share my experiences of them with my fellow bourbon folk! Sláinte – Paddy

Founded in 1997 by father and son Chet and Trey Zoeller, Jefferson’s is a Non-Producer Distiller that sources new and aged whiskey stocks from unknown established distilleries and blends them on a very small batch scale to create a variety of interesting whiskies. Known for their experimental ‘mad scientist’ approach, Jefferson’s use a range of innovative techniques, wood/cask finishes, and collaborations to produce their famous whiskies. Currently based in the Kentucky Artisan Distillery, KY, Jefferson’s have also begun the process of crafting their own whiskey in recent years. Their core range consists of their Very Small Batch bourbon, their Very Old Reserve bourbon, their Ocean Aged bourbon, and their Presidential Select line.

As Jefferson’s first wine-cask finished bourbon, Jefferson’s Reserve Groth Cask was the amalgamation of Jefferson’s founder Trey Zoeller’s love of bourbon and Californian wines from the Nappa Valley region. Created using a twin wood ageing process, this release took a 6 year old bourbon that was first aged in new charred white oak, and re-barreled it for 9 months in freshly dumped ex-Cabernet Sauvignon French Oak barrels from the award winning Groth winery in Napa Valley, California. Once re-barreled these French Oak barrels were stored in a ‘hot box’ steel shed where very high temperatures sweat the wine out of the wood and into the bourbon to create a marriage of the two. This finishing experiment was an attempt by Jefferson’s founder Trey Zoeller to add further complexity and bold flavours to his reserve bourbon without breaking the laws surrounding bourbon production by adulterating the bourbon with additives. 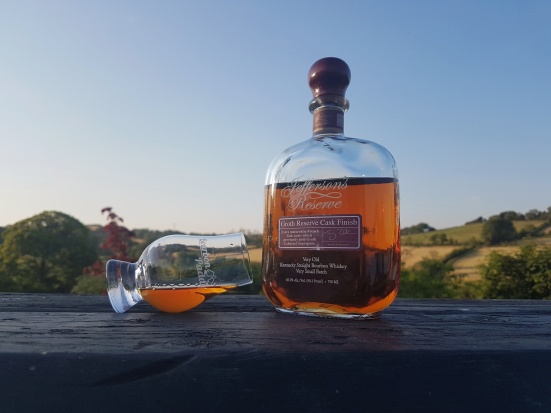 Wow, I really like this! Not to sound like I wasn’t expecting it, but as someone who has no love for wine I honestly wasn’t expecting the depth of flavour that Zoeller’s experiment would impart on this bourbon. As this is a Jefferson’s Reserve bourbon foremost, I drank my third sip of this with a side sip of Jefferson’s standard reserve bourbon. Side by side there was no denying that both were Jefferson’s typical high rye style, however, where the standard Reserve’s flavours were a balance of rye spice, fruitiness, and old oak, this bottling took those and added a wonderful complex dark fruit and toasted oak note that I can only describe as bourbon soaked cherries. Why such a specific note? Well, like I said, I’m not a wine drinker in the slightest,  however, I still gave this a shot to see what my untrained palate  would identify as the red wine notes. From the second I nosed this I was reminded of my jar of homemade bourbon-soaked cocktail cherries that are sitting in my refrigerator door. Having used fresh black cherries, brown sugar, and Wild Turkey Rare Breed for the recipe the result was a sweet, spicy and delicious batch of cocktail cherries. This bourbon really reminds me of these. Where the standard reserve ends after a wave of rye spice this bourbon keeps going and also delivers these lovely cherry and toasted oak notes perfectly. These notes I attribute to having been sweated in french oak barrels for the 9 months and the influence this has had on the bourbon is very evident. It is also important to note that at no point do these flavours overwhelm the base bourbon, only improving it more.

Jefferson’s really took a gamble with this one. Wine finishing can be tricky at best and adding a hot box and toasted oak notes on top of an already aged bourbon could have ended in disaster. Luckily for everyone it didn’t and the end result is a beautiful bourbon with added complexity without being overwhelmingly wine-flavoured or oak-heavy. Don’t get me wrong this whiskey hasn’t inspired me to cast off my heretic ways and run into the wine world hoping for forgiveness, instead it’s shown me that when properly done wine and bourbon can co-exist peacefully and bring out the best in each other. Now all we need is a Groth wine that was aged in ex-Jefferson’s barrels to see if this relationship goes both ways.

Now, all this talk of my cocktail cherries has reminded me that they’re there so excuse me whilst I go make myself something to have them in. Sláinte!

Despite being a Jefferson’s Reserve bottling this bourbon is distinct enough for me to justify having a bottle of both. I really like this bourbon and would highly recommend you buy it if you find it gathering dust somewhere. Otherwise, if you know a bar that has this on the shelf a taste wouldn’t kill – I promise!