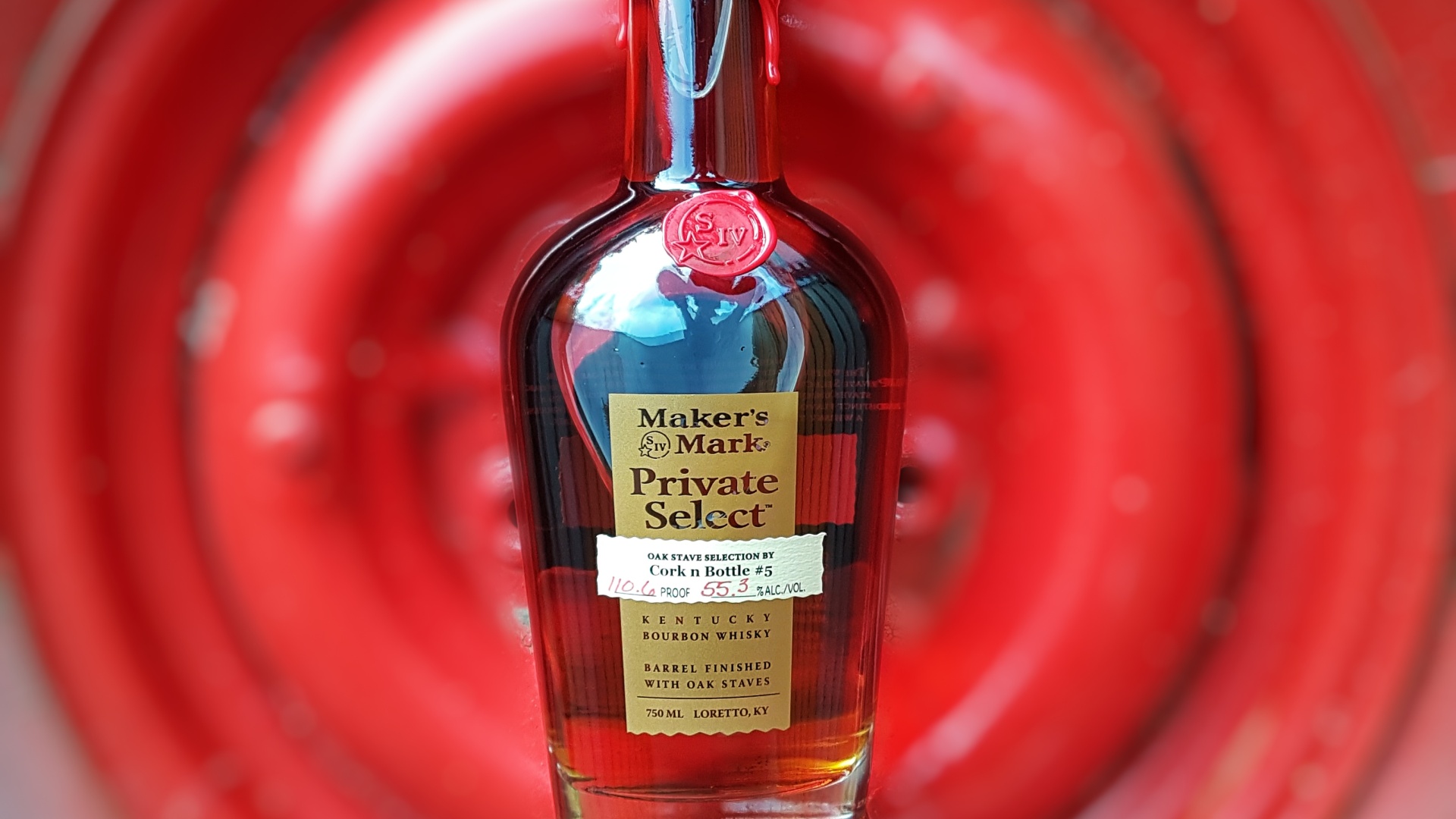 Operating from the site of the old Burk’s Distillery in Loretto, KY, Maker’s Mark have been making their signature premium bourbon since 1954 under the watchful eyes of three generations of the Samuels family. Making only bourbon with red winter wheat as the flavouring grain, Maker’s Mark is steeped in modern bourbon history with their recipe and propriety yeast coming from the legendary Stitzel-Weller Distillery. Known for their iconic square-shaped bottles and dripping red wax seals, the brand is aimed at the premium bourbon market and features a small batch, non-chill filtered bourbon aged between 6-8 years. Maker’s Mark bourbon is now bottled under 4 labels standard Maker’s Mark Small Batch, Maker’s 46, Maker’s Cask Strength, and Maker’s Private Select. Maker’s Mark also bottle a limited seasonal Mint Julep liqueur which is their bourbon infused with mint and added sugar for a ready-made cocktail.

In 2016 Maker’s Mark announced their Maker’s Mark Private Select Program to many excited fans. Their already existing range of bourbon whiskies include Maker’s Mark, Maker’s 46, and Maker’s Cask Strength. This program allows customers to create their own unique barrel proof version of Maker’s 46, but instead of being limited to just Maker’s 46 French Oak staves, there are five different specially created stave types to choose from with each one imparting a very different flavour on their barrel of Maker’s Mark. With 1,001 different combinations of finishing staves possible, the Maker’s Private Select process has been called ‘the most customizable and interactive barrel selection program on the market.’ However, to fully appreciate it’s significance I think it’s important to go back and see how Maker’s made this possible.

Since 1954 Maker’s have earned themselves a proud reputation by making only one single bourbon whisky with meticulous attention to detail and maintaining their ethos of quality premium bourbon produced in small batches to demand. Throughout this time they were owned by various major beverage companies, almost dropped the proof, and withstood customer pressure to extend their line of whiskies or release their whiskies at an older age. Then, as the story goes, in 2008, after years of promoting Maker’s Mark, and essentially ignoring customer requests about expanding their line, Bill Samuels, Jr. decided it was time to try something different. Although never a big believer in ‘line extensions’ or flavoured bourbons, Bill and then-Master Distiller Kevin Smith decided to try and create something special. Together they set out to create a whisky that maintains the qualities that make Maker’s so approachable, intensifies the classic vanilla, caramel and spicy notes of Maker’s whilst adding complexity and richer taste, and gives a longer finish. To help with this they enlisted the Independent Stave Company and after months of experimenting with a special barrel, different wood varieties, levels of char and cooking techniques, they finally found what they were looking for. The winning combination involved searing 10 virgin French oak staves to caramelize the wood sugars and lock in the bitter tannins, inserting them into a barrel, adding fully matured Maker’s Mark back into the modified barrel, and returning it to the warehouse for further ageing. Initially this could only be accomplished during the cool winter months but nine weeks later they found the bourbon noticeably bigger and bolder, but with the smoothness and drinkability of Maker’s. The result was named Maker’s 46 and was the first new expression in the distillery’s core range since the company was founded.

The good news is that the experiments didn’t end there and Maker’s were so impressed with the success of Maker’s 46 that they continued to test further wood treatments. The aim was that these could be used to finish their bourbon and intensify specific flavour elements already existing in Maker’s Mark. After years of experimentation and further collaboration with the Independent Stave Co. 4 more wood treatments were found that could achieve this. These were: Baked American Pure 2, Seared French Cuveé, Roasted French Mocha, and Toasted French Spice. This in turn led to the creation of the current Private Select Program where Maker’s allow their customers to choose a combination of 10 staves in any of these 5 treatments in order to craft one of 1000 potential flavour combinations.

The Private Select bottling that I will be reviewing today is from Cork ‘N Bottle liquor store in Crescent Springs, KY, and was chosen by a team led by Ed Bley. The wood treatments that were chosen were 5 Baked American Pure 2, and 5 Seared French Cuveé staves. These staves are described as follows:

Baked American Pure 2: A classic cut wood stave of American white oak that has been toasted (cooked) in a convection oven at low temperatures for a long time. The treatment enhances flavors of sweet brown sugar, vanilla, caramel and wood spices like cinnamon and cloves.

Seared French Cuvée: A ridged stave of French oak that has been toasted in an infrared oven. Ridged means that the stave has channels or ruffles cut into it after it has been cooked, exposing different layers of toasted wood. They also have 22% more surface area than a conventional stave. The top of the ridge gets significantly more heat treatment than the bottom of the ridge. Think of a Ruffles potato chip or a piece of corduroy cloth. This particular treatment maximizes flavors of caramel, toasted almonds, sweet honey, buttery, spicy and toasty oak notes.

From speaking to Ed, I’ve learned that this was the 4th barrel they’ve chosen with this particular flavour combination, with Ed telling me it was created with a 1972 bottle of Maker’s Mark acting as a control so they could boost the flavour notes that are associated with historic Stitzel-Weller bourbon – as Maker’s uses the same mashbill and yeast as they did at the legendary Stitzel-Weller Distillery.

Nose: The nose is rich and opens with sweet deep caramel and dark cherries, followed by floral vanilla, a dash of earthy oak spice, and subtle baking spices. There’s are also notes of coffee and toasted oak but these are very faint.

Palate: The palate is thick and opens with a wave of sweet toffee, faint vanilla, toasted nuts, and hot oak spice, leading to dark cherries, thick molasses, and baking spices again, as the spice fades.

This is hands down the best bottle of Maker’s Mark I’ve ever tasted, and makes me profoundly grateful for the hard work Maker’s put in to make store picks like this a possibility. On my third drink of this I drank it side by side with standard Maker’s 46 and Maker’s Cask Strength (110 proof) and found it blew both out of the water. What impressed me the most about this bourbon is that it has managed to maintain those classic Maker’s flavours whilst adding complexity to them. Whereas traditional Maker’s would give notes of caramel, vanilla, spice and oak, this bottle also has fresh cherries, baking spices, toasted oak, a hint of coffee, and herbaceous barrels. For a bourbon that has had 10 additional oak staves added to it would also be easy to assume that strong tannic oak would be a dominating flavour, however, instead you get is a subtle undertone of toasted oak and spice that instead carries the rest of the flavours and balances the whole experience. If I had to compare this to another wheater I’ve tasted it would be William Larue Weller 2016. What’s similar is both are thick and complex with that beautiful fresh cherry note, a big push of caramel, and plenty of baking and barrel spice to boot. Tasting this I can tell why Corn ‘N Bottle have used this particular combination four times in the past, it’s robust, flavourful, and very complex. Although this batch didn’t come out a ‘caramel bomb’ as Ed had described previous batches, the flavours still came together to make a very enjoyable bourbon.

I hope these picks become more popular as fans old and new realise the quality of what’s being bottled. Although the stave combo would have a definite impact on the final flavour I was pleasantly surprised to find that the base Maker’s and even the barrel it was aged were still very present throughout. When Bill Samuels Jr. set out to create this expression he wanted to create something that would be true to Maker’s classic flavour profile, would boost the desired flavour  notes already present in Maker’s, and add a more complex and lengthy finish. After tasting this bourbon I can confirm his vision an absolute success and I’m very excited to see what Maker’s come out with over the next couple of years, especially considering that all their newest lines have all emerged in the space of the last 8 years.

For me this has been another successful pick by the guys from Cork ‘N Bottle, having previously tried and loved their Knob Creek Single Barrel Rye pick. If you’re ever in Northern KY and looking for something special that chosen by a man with over 200 barrel picks under his belt look no further. Good liquor stores run by decent people deserve praise in my opinion and I’ve nothing negative to say about the team at Cork ‘N Bottle.  Through my numerous contacts with Ed and the team their responses to my (sometimes annoying) questions have always been quick and courteous, which goes a long way to show how much they care about their products and their customers in my eyes. Shop with the confidence that you’re in good hands!

At the time of writing this particular bottling is well and truly long gone. That being said, the regularity with which these Private Select bottlings are popping up in liquor stores means you’re never too far from getting your hands on a great pour at a good price. Try it if you’re skeptical of the stave combination used but if you’re a Maker’s fan like me you’re going to like this expression a lot!