Founded in 2009 in the heart of Appalachian country, West Virginia, Smooth Ambler is an award winning craft distillery founded by TAG Galyean and John Little. Through an ethos of honesty, hard work, and the finest local ingredients combined with state-of-the-art equipment, Smooth Ambler has gained a large loyal following of whiskey and spirit drinkers. Having initially built their name on their openly-sourced whiskey stocks from MGP ingredients in Indiana bottled under their Old Scout brand, recent years have seen Smooth Ambler’s own whiskies reach maturity and release in limited amounts to their eager fans.

To date Smooth Ambler have released three bottlings of their own-made whiskey: their yearling release, their Wheated Bourbon release last year, and now their Big Level bourbon release. Although their previous releases were all quite young, with the spirit reflecting this, each subsequent release since their Yearling bourbon has given fans more hope for what the future holds for Smooth Ambler’s own whiskey stocks as they continue to mature. The newest release, Big Level, is again a wheated bourbon and features the same whiskey as we saw in their previous Wheated Bourbon release. It is bottled at 5 years old and featuring a mashbill of corn, wheat, and malted barley and Smooth ambler’s Master distiller and CEO John Little states that, “The release of Big Level signifies the beginning of our long-term ability to offer a third, important category of whiskeys to the US: those which are 100% made here in West Virginia.” Little also stated that “We’re excited for this whiskey to complement the merchant [sourced] bottled and “married” (merchant and homemade blended together) families already embraced by our business.” The importance of this release shouldn’t be overlooked as it marks the moment Smooth Ambler adds a new bottle to their popular range, only this time the whiskey inside is 100% theirs – no sourcing. 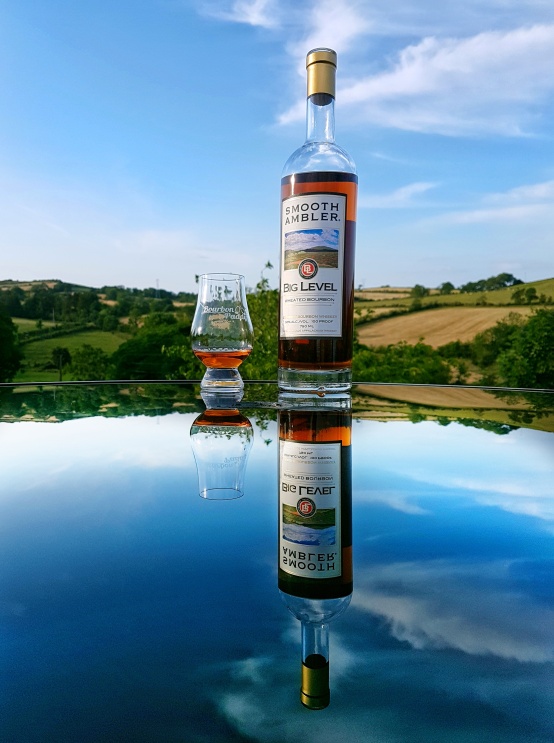 Finish: The finish is long and warming, opening with a dash of warming oak spice which fades to more dark fruits, roasted nuts and floral vanilla leaving an aftertaste of herbaceous and dry oak.

Big Level surprised me. With the fiery taste of Smooth Ambler’s Wheated Bourbon release still ringing in my memory I was expecting something similar from Big Level. I was wrong and instead what I got is a really good wheated bourbon. Sure, it still tastes a touch young, and I wouldn’t name it my wheated bourbon of the year, but the added maturity since the previous release and the potential this bourbon shows has me very excited for what is to come. In fact, previous releases of Smooth Ambler’s own-made whiskies have taken quite a beating in the bourbon world, to put it lightly, due to their lack of maturity. Thirst-hungry fans with the taste of their mature Old Scout range in their mouths descended on these new releases hoping they would be the substitute for what is a dwindling supply of MGPI-sourced bourbon and rye. Instead what greeted them were somewhat young and aggressively spicy craft whiskies with grains still running hot in the liquid, and rough edges still in need of many years in the oak before they would be smoothed enough to resemble anything as complex and flavorful as their Old Scout whiskies. People paid over the odds for bottles of their Wheated Bourbon, fans were left disappointed by how it showed its youth, and many concluded that Smooth Ambler’s glory days came from heir ability to source and release really good whiskies from MGPI. The truth, however, is Smooth Ambler were never trying to replicate the stocks or style of what they had sourced from MGPI. Instead, they used those stocks as a means to enter the market and to fund and create their distinctive style of whiskey using their own methods and tricks, they are a craft distillery after all. In my opinion the use of wheat as a flavouring grain is what is mostly to blame with the criticism their previous releases have received. High rye whiskies seem to gain maturity quicker with the bold flavours of the rye not requiring an overly extended ageing. However, wheat seems to do the opposite, instead requiring long years to smooth out the rough edges and fiery spice whilst that beloved sweet and smooth flavour profile reveals itself. This makes using wheat risky if you’re pushed by eager fans to release your whiskey as soon as possible but with patience you  will be rewarded with a smooth and deeply flavourful bourbon. Another important point is that Smooth Ambler didn’t release any of these bottlings with the words ‘Limited Edition or Release’ plastered across the labels with a hefty price tag to match-these bottlings were always released at a fair price and any price inflation after this was of no profit to them just the flippers and hoarders (as is traditional).

I like Smooth Ambler’s refreshing honesty with their customers about their products. With this release they even went as far as to fully disclose the mashbill, distillation processes, age, char level used, barrel size used, and commenting on the source of the grains used in making this whiskey. Smooth Ambler are straight shooters who use whatever resources they can muster to produce quality whiksies and as such have a life-long fan in me.

This release readily competes with other mid-shelf and even some top-shelf wheated bourbons for me. With this in mind if you find it at a reasonable price I wouldn’t hesitate to add at least 1 bottle to my collection. n fact, when this hits the UK I’ll have my sights set on at least 1 more bottle if the price is right (thanks bourbon tariffs).