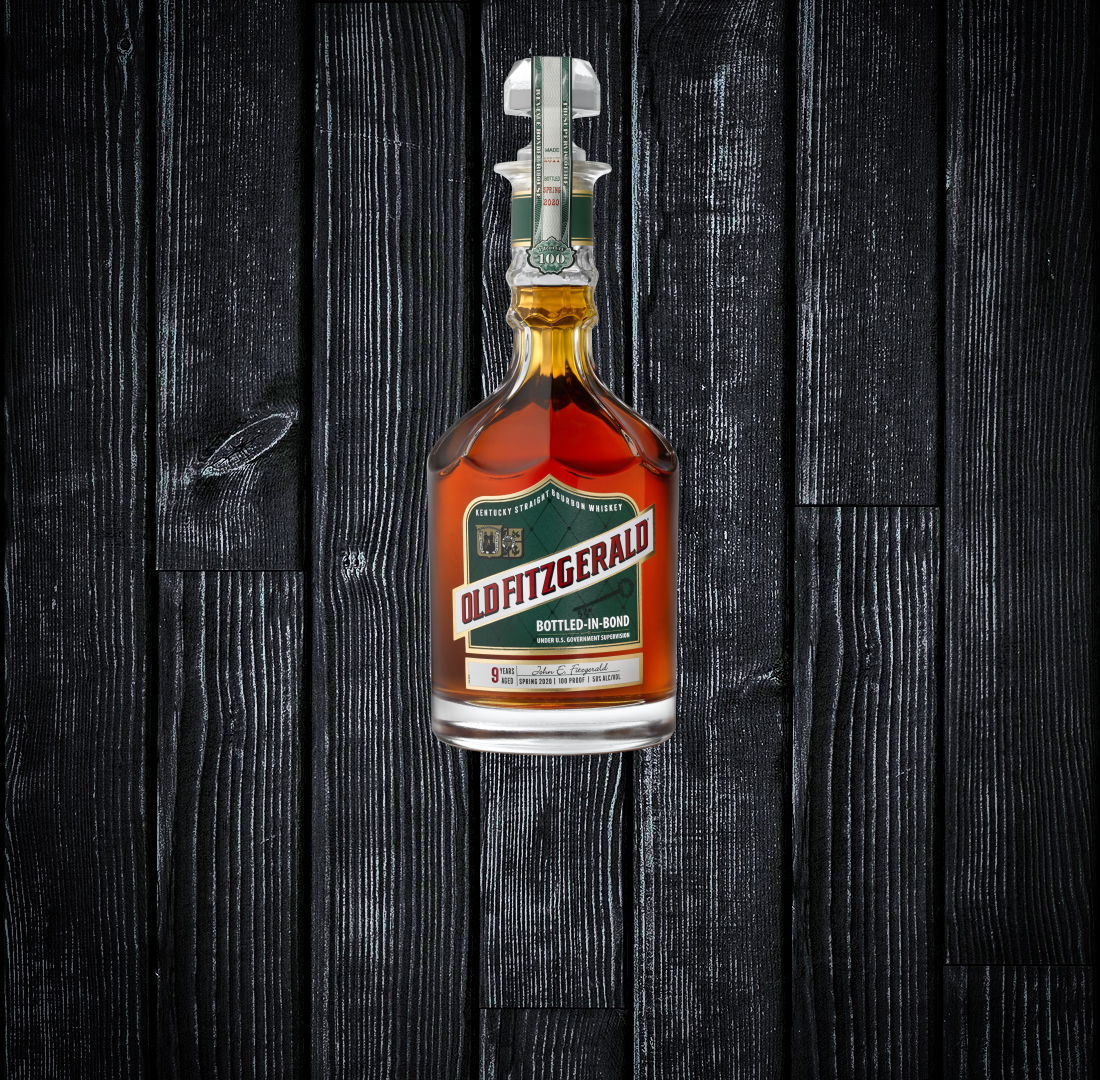 Today the modern iteration of the company, Heaven Hill Brands, has become a diversified supplier of whiskeys, liqueurs, vodkas, rums and other spirits. They own 57 rickhouses in Central KY and distribute over 48 brands including 17 bourbon labels such as Henry McKenna, Elijah Craig, Evan William, Larceny, Old Fitzgerald, and Rittenhouse rye to name a few. The distillery also has the largest number of Bottled in Bond whiskies on the market and is the only heritage distiller that features every major category of American whiskey in their 5 distinct mashbills producing traditional bourbon, wheated bourbon, rye whiskey, corn whiskey, and wheat whiskey. Under 7th Master Distiller (and fellow countryman) Conor O’Driscoll the distillery was on course to fill almost 400,000 barrels last year and with continued investment production capacity is growing every year to meet rising demand.

First released in spring of 2018, the Old Fitzgerald Bottled-in-Bond series pays homage to the vibrant history of the Old Fitzgerald brand and John E. Fitzgerald with a bi-annual release of bourbon from Heaven Hill’s wheated mash bill. The particular Fitzgerald in question is believed to have been either a distiller of repute or a treasury man well-known for pilfering honey barrels – depending on which story you chose to believe. Bottled in an ornate decanter that was inspired by the Old Fitzgerald Diamond decanter from the ‘50s, there have been multiple releases to date with 2020’s Spring edition marking the fifth release.

Historically, the Old Fitzgerald brand is well-known for the distilling pedigree behind it. First registered in 1884 by S.C. Herbst, it was one of the few American whiskies of its time to be distilled using the pot still method and continuing to do so until around 1913. With the arrival of Prohibition the brand was one of a select few which were allowed to distil under government supervision for the national medicinal trade and was subsequently sold to famous distiller Julian P. “Pappy” Van Winkle. Van Winkle famously introduced wheat to the mashbill instead of rye and once Repeal was enacted, moved production of Old Fitzgerald to his Stitzel-Weller Distillery. There it became the first great wheated bourbon before the Distillery shut its doors in 1992. In 1999 then-owners Diageo sold the brand and the Old Bernheim Distillery in Louisville to Heaven Hill where it has continued to be produced under the watchful eye of the company widely proclaimed as the industry leader in the Bottled-in-Bond category.

As with past editions, the 2020 Spring Edition carries a green label and carries a tax strip stating the year and season the whiskey was distilled and bottled. A tax strip, in terms of traditional Bottled-in-Bond whiskies, was a signature of transparency which disclosed when the liquid was produced and bottled. As a Bottled-in-Bond bourbon this whiskey also meets all the strict requirements of the Bottled-in-Bond Act of 1897, i.e. it’s the product of a single distillery from a single distilling season, aged a minimum of four years, and bottled at 100 proof or 50% alcohol by volume.

Today I’ll be taking a look at the 2020 Spring Edition of this whiskey. Released towards the end of July this whiskey has taken fans by storm. Having only ever tried the previous Fall 2019 release I’m looking forward to tasting a younger release of this whiskey.

Nose: The nose opens with deep brown sugar that’s mixed with earthy barrel spices and is reminiscent of a toasted barrel, these are followed by a touch of clove, faint dried red fruit, a dash of cinnamon, toasted coconut shavings dusted in cacao and some charred oak bitterness.

Palate: The palate is semi-viscous, opening with dry cacao powder that turns into deep caramel bordering on butterscotch, charred oak, earthy fire-roasted nuts, dried red fruit, dark chocolate, a touch of citrus oil, and a kick of peppery spice that builds on the mid-palate. As you continue to chew it leans more towards the barrel-driven notes with notes of cloves, barrel spice, and tannins emerging alongside dark chocolate.

Finish: The finish opens with lingering peppery spice from the palate before earthy baking spices, a touch of maple syrup sweetness, and tannic charred oak all emerge and leave an aftertaste of charred oak tannins, bitter cacao powder and faint maple syrup.

This bourbon is a tricky one. Initially, it’s bitter and barrel-driven with a lot of spice, dark chocolate, and charred oak tannins almost drowning out everything else from nose to finish. However, once you get to your second dram it changes completely and becomes an absolutely deliciously robust bourbon with flavour complexities that could stand against any well-aged bourbon. Yes, once it has opened there is still a strong barrel influence, however, this is rounded out by delicious near-butterscotch flavours and dried red fruit notes that not just give a great wheated bourbon experience but also drives flavour subtleties that the first few sips lack. I tasted this whiskey on 4 separate occasions and on the 4th I drank this side by side with the Heaven Hill 7 y.o. Bottled-in-Bond just to see how it stands against a 7 year old high-rye bourbon that’s aged in the same barrels and is only 2 years younger. The results were very surprising with this bourbon being much spicier (despite being made with a wheated mashbill) but also carrying a lot more complexity and flavour depth than the 7. In fact, drinking these side by side really helped to frame all the subtleties of this bourbon and give a point of reference for just how influential the wheat is in the background of this bourbon in giving you that wheated bourbon drinking experience that you know you’re having but find hard to pinpoint exactly why!

One thing that surprised me was the prickling spice on the palate that would be uncharacteristic for a wheated bourbon. However, further research into the topic yielded that this spice comes from the oak and the breakdown of cellulosic compounds in the barrel over time. In a typical wheated bourbon you wouldn’t get as many of these as they are typically only present in high concentrations in rye and old oak, meaning that wheated bourbon released at around 6 – 8 years old would be softer with very little spice. In this bourbon, however, you’ve clearly reached the point where the peppery oak spice and the mild wheated bourbon have met in the middle to give a wheat flavour profile with a solid backbone of oak.

As a bi-annual release these whiskies give bourbon drinkers both a unique opportunity to taste some of Heaven Hill’s best wheated bourbon stocks aswell as a great looking decanter for future use. Having tasted two releases now it’s clear that the idea behind this release is both to honour the Old Fitzgerald legacy and give bourbon drinkers a complex wheated bourbon experience that they won’t find elsewhere.

The MSRP for this whiskey is $90 ($10 a year). At that price you are getting a really interesting limited-release bourbon that many whiskies twice the price can’t deliver. That’s all I can say!