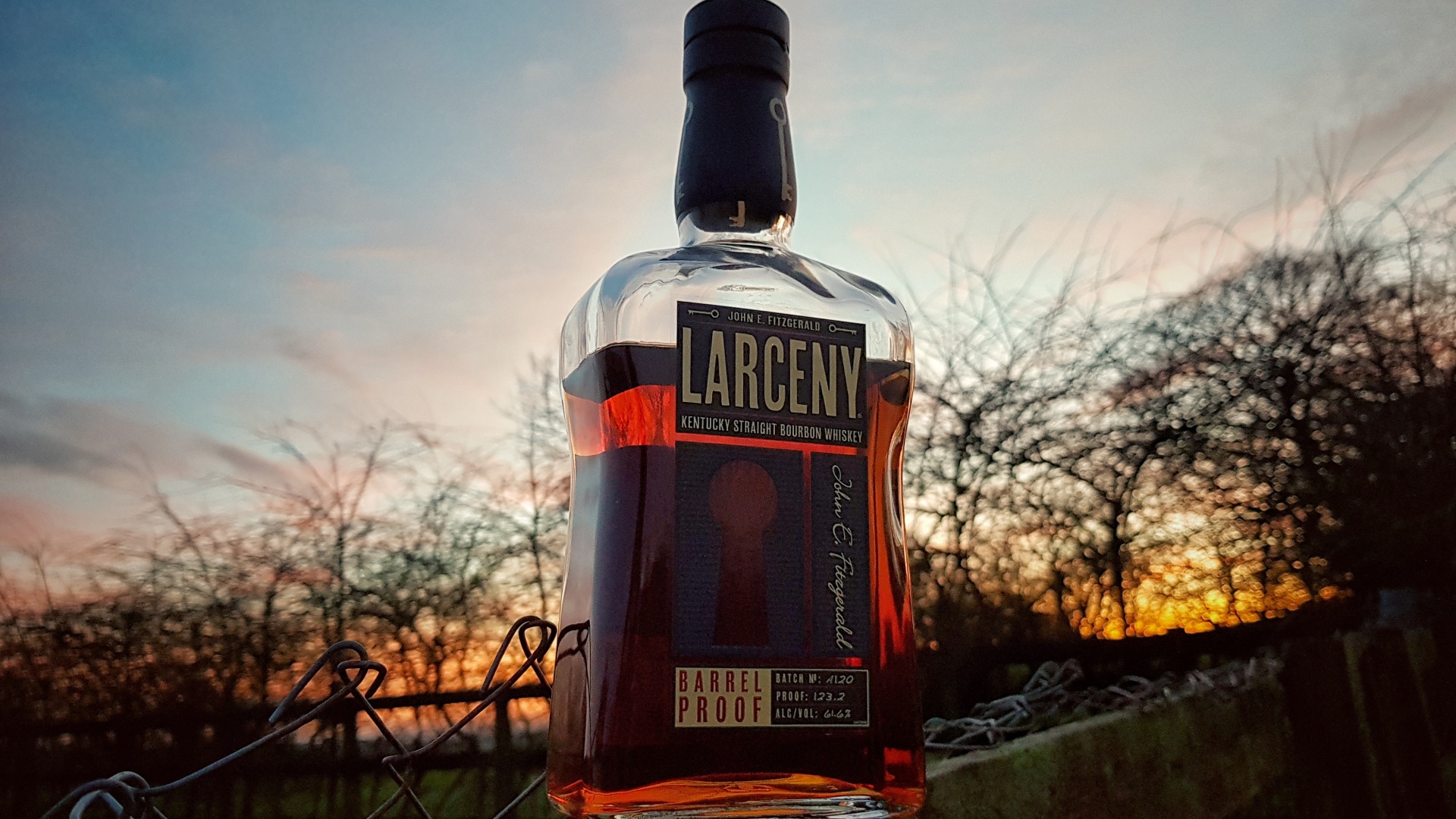 Today the modern iteration of the company, Heaven Hill Brands, has become a diversified supplier of whiskeys, liqueurs, vodkas, rums and other spirits. They own 57 rickhouses in Central KY and distribute over 48 brands including 17 bourbon labels such as Henry McKenna, Elijah Craig, Evan William, Larceny, Old Fitzgerald, and Rittenhouse rye to name a few. The distillery also has the largest number of Bottled in Bond whiskies on the market and is the only heritage distiller that features every major category of American whiskey in their 5 distinct mashbills producing traditional bourbon, wheated bourbon, rye whiskey, corn whiskey, and wheat whiskey. Under 7th Master Distiller (and fellow countryman) Conor O’Driscoll the distillery is on course to fill lamost 400,000 barrels this year and with continued investment production capacity is growing every year to meet rising demand.

First launched in 2012, Larceny bourbon is a wheated bourbon that is named in honour of John E. Fitzgerald who, according to legend, was a treasury agent who used his keys to the warehouses to pilfer Bourbon from the best barrels, thus committing larceny. In fact, story has it that Fitzgerald’s palate was so good at finding the best barrels that S.C Herbst who owned the “Old Fitz” brand from the 1880’s through Prohibition, and “Pappy” Van Winkle, who purchased the brand during Prohibition and made it his signature label, both decided to immortalise Fitzgerald by creating and maintaining the namesake brand. Whether Fitzgerald was actually a treasury agent with a penchant for draining honey barrels in the night, or whether he was a historical distiller who used wheat as the flavouring grain in his bourbon instead of rye, the Old Fitzgerald brand still exists to this day and Larceny honours the unofficial side of Fitzgerald’s supposed history. Larceny Bourbon continues the Old Fitzgerald tradition of using wheat in place of rye and uses winter wheat to replace the spicier, fruitier flavor notes that rye provides with a softer, rounder character that is the hallmark of Old Fitzgerald and other “wheated” Bourbons such as Maker’s Mark and the Van Winkle line.  What separates Larceny from its competitors is that it uses Heaven Hill’s wheated bourbon mashbill which contains just over a third more wheat thus making for a softer drinking experience.

Bottled at 92 proof, Larceny small batch is aimed at the premium market and produced from dumps of 200 or fewer barrels that have been selected from the 4th, 5th and 6th floors of Heaven Hill’s open rick warehouses in Nelson County, KY., and features bourbon aged from 6 to 12 years old. At this age Larceny sits towards the older end of the readily available wheated bourbon spectrum and so when it was announced that Heaven Hill will be releasing a barrel proof bottling in 2020 word spread like wildfire. As the first line extension of the Larceny Brand, Heaven Hill have stated that Larceny Barrel Proof “offers whiskey fans an opportunity to taste Larceny as Heaven Hill’s Master Distiller does, straight out of the barrel and non-chill filtered.” With the first batch A120 hitting shelves in January of 2020 further details emerged in December of 2019 confirming the first release as a 123.2 proof (61.6% ABV) bourbon with a total of three releases planned every year.

Today I’m going to be taking a look at this first release of Larceny Barrel Proof. With similar distribution to Elijah Craig Barrel Proof I assume that this will see similar availability in the US with a wider EU and Rest of World release no doubt coming online at a later stage with subsequent batches.

Palate:The palate opens viscous with earthy peanuts drizzled in toffee, before notes of fresh red fruit, dried cherries, and a touch of citrus oil lead into earthy baking spices, dark chocolate, herbaceous charred oak, and a pricking spice that spreads across the palate as you continue to chew.

Drinking this whiskey there is no denying that it’s a Heaven Hill whiskey. True to Heaven Hill form, the influence from the barrel sets the foundation upon which all the other flavours build and this whiskey is a perfect example. Instead of a dominant wheat presence, there’s a core of dark chocolate, barrel char, and herbaceous toasted oak which form the backbone with the wheat-driven notes slotting around this to deliver a strong balance between fruity, bitter, and spicy whilst softening the intensity of the barrel-driven notes. As far as the wheat flavours go there is also sweet red fruit, and almost sour dried cherry notes, which combine with the usual baking spices and the high proof to deliver a wheated bourbon that is very reminiscent of other cask strength whiskies such as William Larue Weller and Maker’s Mark Cask Strength. Where this differentiates itself from other barrel proof wheated bourbons is that its flavours aren’t as over-concentrated and the tannins don’t overwhelm the palate- despite having a high proof for a wheated bourbon. Similar to the standard Larceny, there’s a very viscous mouthfeel and balance of flavours bringing a high level of drinkability to this bourbon and akin to its barrel proof cousin, Elijah Craig Barrel Proof, Larceny Barrel Proof also brings its share of heat whilst delivering great balance and flavour complexity without burning your face off.

With a splash of water the alcohol on the nose becomes subdued, increasingly wheat-forward, and brims with brown sugar and thick vanilla. The palate becomes oilier with less peanuts and more buttery caramel that rounds out the red-fruit notes. Drank neat there’s a reasonable amount of heat on the palate which comes from the high proof but with a splash of water this dies away almost completely and leaves you to really appreciate the finer flavour intricacies of this release.

As the first new release from Heaven Hill in 2020 Larceny Barrel Proof really sets the tone for what is set to be another strong year for Master Distiller Conor O’Driscoll and his very talented team. When word of brand extensions like this reaches fans it is usually followed by an equal amount of excitement and trepidation. For many these extensions are the bottling they have been asking for for years, but for others it represents a potential for another average release that will become overpriced and scarce in a market that over-hypes limited releases and artificially increases prices as a response. Luckily this isn’t Heaven Hill’s first rodeo and despite being a limited release this will see multiple releases throughout the year. Combine this with a very reasonable suggested retail price for a very well put together whiskey and I’d say that Larceny fans and those who have waited for this release since 2012 won’t be disappointed with this extension.

For the princely sum of $50, your money (and then some) could be spent on much worse. For a barrel proof wheated bourbon with over a third more wheat in the recipe than its competitors you really are getting a great wheated bourbon for your buck with this release. Buy it if you see it!