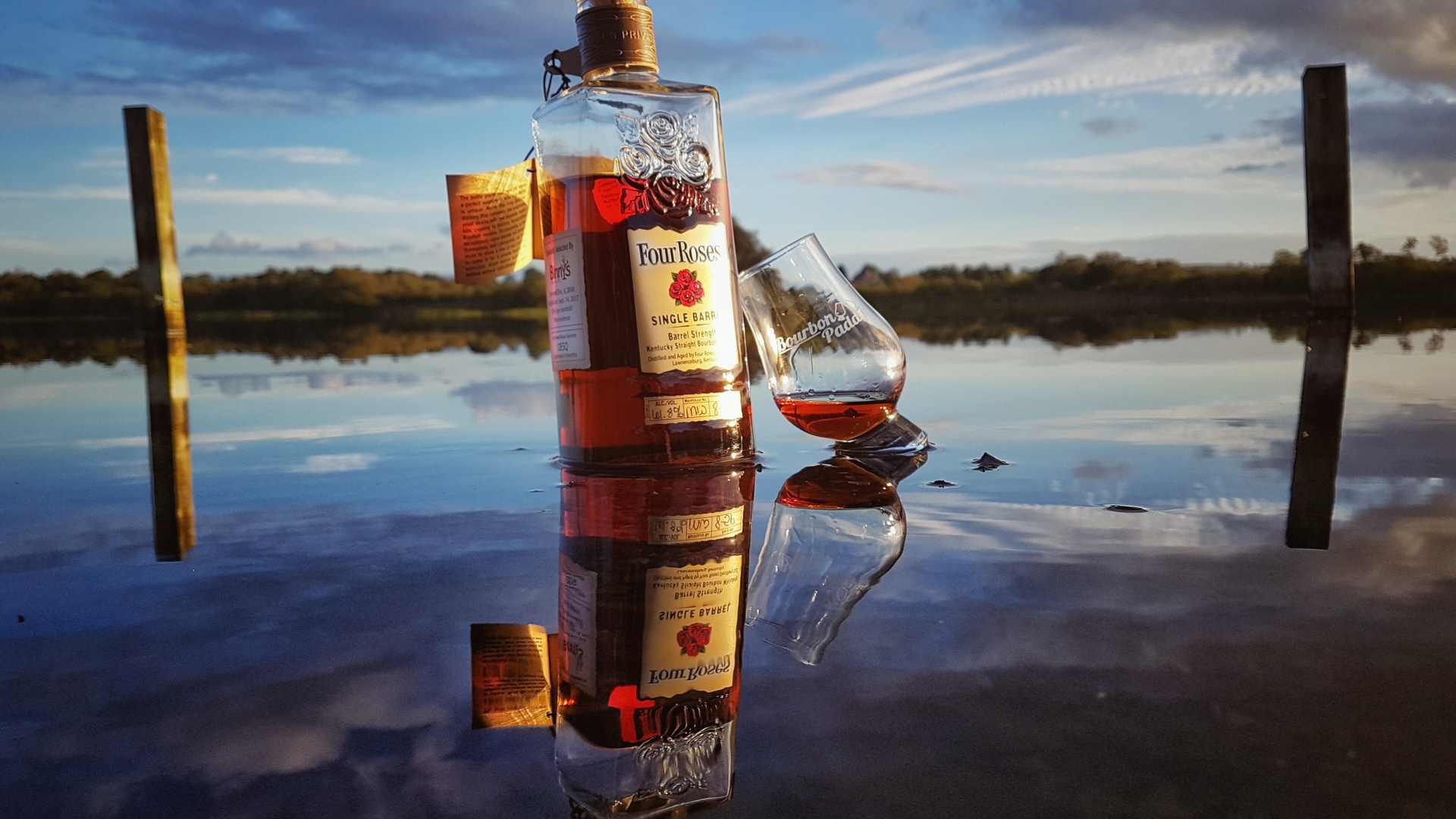 With 130 years of history behind it, the Four Roses brand has persevered through many challenges to become the renowned bourbon icon it is today. Once the top-selling Bourbon in the U.S., a takeover by Seagrams in the late 40s resulted in Four Roses Kentucky Straight Bourbon becoming an export-only product to the EU and Asia for decades. It wasn’t until the early 2000’s that the purchase of the brand and production facilities by the Kirin Brewing Company resulted in the brand being returned to the US market as a Kentucky Straight Bourbon. Under the watchful eyes of then-Master Distiller Jim Rutledge and now Brent Elliott, the past 16 years has seen the brand become extremely popular once again in both the US and globally. The Four Roses core range consists of their Kentucky straight bourbon, their Small Batch bourbon, and their Single Barrel Bourbon. They also release much sought after limited-edition bottlings of either their Small Batch bourbon, Single Barrel bourbon, or both on an annual basis to eager fans.

The Four Roses distillery and brands are set apart from other distilleries in a number of ways. Collectively they boast 10 distinct bourbon recipes, made by combining two separate mashbills (E with a low percentage of rye, and B with a high percentage of rye) and 5 proprietary yeast strains (V, K, O, Q, F), that are then exclusively aged in single story rack-houses which face in particular directions (North, South, East, West). When it comes to making their bourbon Four Roses emphasise the importance of both their two mashbills and the unique flavour characteristics imparted by their five yeast strains on the finished product. In fact, Four Roses break the mold by going so far as to educate their fans on the unique flavour profiles that arise from making bourbon by combining these. According to their website, their five yeast strains produce flavours such as delicate fruit (V), slight spice (K), rich fruit (O), floral essence (Q), and herbal notes (F). The Four Roses core range, consisting of their Kentucky straight bourbon, their Small Batch bourbon, and their Single Barrel Bourbon, use one or more of these 10 recipes, either individually or blended, to produce the desired flavour profiles. Their Kentucky Straight Bourbon uses all ten, their Small Batch uses four of the recipes, and their standard Single Barrel uses just one. Through the process of blending their recipes together, and using single-story rack-houses, Four Roses achieve more consistency across their products by using the unique flavours of their 10 recipes.

Today I’ll be taking a look at a Four Roses Single Barrel chosen by and bottled in 2017 for Binny’s Beverage Depot in Chicago, IL, through the Four Roses Private Select Program. This programme allows customers to select a single barrel of one of Four Roses bourbon recipes which is then bottled at cask strength. This very popular barrel pick programme is an off-shoot from their already existing Single Barrel bourbon but instead of being limited to just one recipe, and being bottled at 100 proof, it allows customers the chance to taste and choose from several other recipes that would otherwise not be released outside of Four Roses’ Limited Edition Single Barrel releases. The single barrel features the OESQ recipe which the Four Roses website describes as being ‘Floral, Banana, Fresh, Medium Body.’ 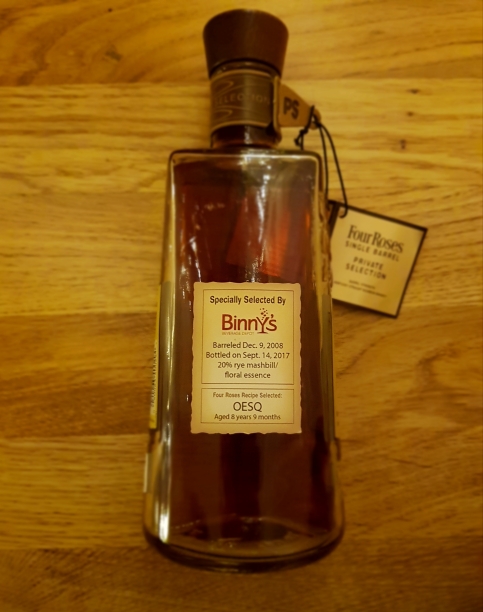 Palate: The palate opens thick with a combination of barrel smoke and deep caramel before notes of stewed red fruit, earthy baking spices, and herbaceous oak come from the back.

Finish: The finish opens with a kick of charred oak spice before fading to notes of dark chocolate and red fruit, leaving a tannic aftertaste of earthy smoky oak and lingering spice.

This is a beast of a bourbon and it tastes unlike anything I’ve had before from Four Roses. It’s thick on the palate, intensely flavourful, and packed full of barrel proof Four Roses goodness. Its flavours develop as you ‘chew’ it and the longer you take to savour it the more deep caramel and red fruit notes emerge past the oak spice, earthiness, and smoke to deliver a flavour-packed bourbon. As this bottling is over 120 proof I added a drop of water and found it reduced the slightly bitter influence of the smoky oak and brought out more of the brown sugar toffee and stewed red fruit notes. This recipe is interesting because it used the low rye mashbill and, although the rye earthiness is still there, the spice and char from the barrel are more central to the flavour profile, adding beautiful earthy and smoky notes to balance the deep caramel and stewed red fruit notes. Personally, I think this barrel pick is on par with some of the best bourbons I’ve tasted and at over 120 proof it certainly packs a punch too.

Four Roses have truly outdone themselves both in general and with this barrel selection programme. They offer fans a transparent approach to almost their entire production process, sharing details such as detailed mashbills, yeast types used, components of blends, etc. They even have a web page entirely dedicated to explaining their recipes where you can enter the recipe code of your bottle to learn more about the flavours you can expect. Tasting this whiskey I can see why these picks are so revered among bourbon drinkers. They offer a unique opportunity to try something that the distillery doesn’t release as part of their core range and committed fans have the opportunity to taste all ten recipes side by side (if they found barrel picks of all 10). This is unlike any other distillery’s single barrel programme and as such helps to educate fans on the differences that can be found between the 10 different bourbons that Four Roses produce. It’s been my experience that you only need to mention the prospect of a tasting of all te the Four Roses recipes to fans to instantly have their undivided attention. I hope that Four Roses introduce this programme overseas because getting your hands on bottles can be tedious this side of the pond.

These bottles are a combination of excellent barrel proof bourbon and even better prices for what you’re getting. My only regret is not picking up the other Binny’s Four Roses barrel pick that was sitting on the shelf next to this pick but alas my baggage space was limited. If you see these buy them, especially if it’s your favourite recipe on offer.