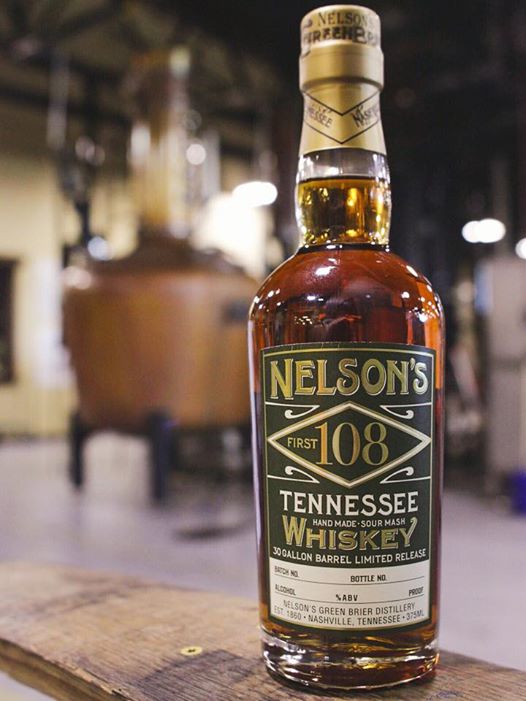 Situated in Nashville, TN, the modern Nelson’s Green Brier Distillery is a revival of a once-famous distillery that was shut down under prohibition and lay dormant for over 100 years. Owned and operated by the great-great-great grandsons of the original owner and distiller Charles Nelson, Andy and Charlie Nelson are re-building the strong reputation for the distillery through their very popular range of Belle Meade sourced bourbons whilst their own stocks are maturing.

Nelson’s First 108 is a limited release of Neslson’s Green Brier Distillery’s own-made wheated Tennessee Whiskey which was first released in July 2017. A micro-distilled Tennessee Whiskey with a wheated recipe, First 108 got its name from the fact that in 2015, Nelson’s filled 108 30-gal barrels with the first run of their own whiskey distilled under the brand name in 108 years. After this run all their new make was barreled in traditional 53-gal barrels and so this is a limited once-off release. This whiskey was released in two expressions, a 90 proof green label, and a cask strength single barrel white label. Today I’ll be reviewing the green label which was first aged in 30 gallon barrels and then finished in 53 gallon barrels before being bottled. It’s important to note that this whiskey is only available from the gift-shop at the distillery and comes in a 375ml bottle.

Mashbill: Not disclosed but contains wheat as a flavouring grain

Palate: The palate has a thick mouthfeel and follows the nose with intense caramel, vanilla, slight notes of baking spices, brown sugar, and charred oak.

Finish: The finish is medium length and opens with a small kick of spice that’s followed by intense caramel and vanilla notes with a touch of brown sugar.

This is really, really good for a two year old whiskey that has been aged in 30 gallon barrels. In fact, when I read that there was wheat in the mash bill my first thought was that this was going to be a rough and fiery ride but I was pleasantly surprised to find a delicious viscous and caramel laden pour that develops as you chew it with a beautiful finish. It’s a slightly spicy caramel bomb that doesn’t hold back on flavour and even the wheat, which usually takes a few years to mature, has been tamed. Of course you can still tell that small barrels were used for ageing as there is an element of oak barrel spice throughout and yet this does not overwhelm the whiskey at all but instead compliments the other flavours nicely. I’m not sure what difference finishing in 53 gal barrels did to this whiskey but I’m assuming a combination of this and maple charcoal filtering (before being barreled) are what helped create this delicious craft whiskey.

This is unlike any other Tennessee whiskies that I have had to date and if it’s this good at 2 years old I personally cannot wait to see what it’s like at 4 or 6 years old when aged in traditional size barrels. Already it drinks with the complexity and body of a whiskey of higher than 90 proof and older that 2 years, and is probably the best 2 year old craft whiskey I’ve had to date.

Based on this whiskey I honestly can’t wait to see how Nelson’s own-made whiskies are going to mature in the future. Sure this was a limited run and was aged in smaller barrels than would typically be used by Nelson’s, but the quality of the spirit is there and I have a feeling this will continue, if not improve, in their other whiskey as they continue to age in the traditional sized barrels. This was a gift-shop only bottling so if you haven’t grabbed one yet your chances of getting one probably aren’t great, unless there’s still some available in the gift-shop itself. Instead, I’d urge curious drinkers to keep on the lookout for future releases from Nelson’s because if this is any indication of how good they’re going to be, they’ll sell fast.