December 2017 marked an exciting month for the American whiskey scene in the UK. Within just a few days of each other two single barrels picks of WhistlePig 10-year-old rye whiskey had landed. One was destined for the eager members of the British Bourbon Society, the other for the very popular fine wine & spirits boutique Hedonism Wines, in London’s Mayfair. WhistlePig has long now been a staple on the back-bars and personal collections of those in the UK that wanted a superior quality rye whiskey that can be enjoyed either straight or in a rye-based cocktail like a Manhattan or a Sazerac.

First some background on WhistlePig. When WhistlePig was set up by entrepreneur Raj Bhakta in 2007 he teamed up with ex-Maker’s Mark Master Distiller Dave Pickerell to help him create the world’s best rye whiskey. Bhakta’s vision was to create a farm-to-bottle craft rye whiskey made using rye grain grown on their farm, water from their wells, and oak barrels crafted from the oak trees growing on the farm, a process he termed ‘Triple-Terroir’. Whilst their own distillery was taking shape on the WhistlePig farm in Vermont, Dave searched for and sourced some of the finest rye whiskey that he could find to bottle, and he found exactly that at Alberta Distillers in Canada. This 100% un-malted rye whiskey from Alberta Distillers was first aged in charred white American oak and then further aged by WhistlePig using a unique double ageing. As part of this process the whiskey spent the first 10 years in new charred American Oak barrels before being brought to the WhistlePig farm where it was then finished in ex-bourbon barrels and bottled when Pickerell gave the green light. When it comes to their single barrel offerings only the top barrels of WhistlePig’s 10-year-old rye are set aside by Dave Pickerell and his team. These single barrel picks were launched to give retailers and rye whiskey lovers a chance to taste a unique barrel of their 10-year-old rye at barrel proof.

Despite being a long-time fan of WhistlePig I had never had it at cask strength prior to these little piggies hit the UK market so today I’ll be doing a side-by-side review of the standard WhistlePig 10-year-old rye, the single-barrel picked by the British Bourbon Society, and the single-barrel picked by Hedonism Wines. I find the standard WhistlePig 10 to be a great rye (albeit a bit expensive over here), thus, the aim of this will be to see which elements (if any) from the standard WhistlePig 10 will shine through in each of these barrel proof picks. Before we start I also feel I should point out that I don’t have a full bottle of each of these Whistle Pig offerings so my amateur caricatures of WhistlePig’s mascot Mortimer representing each of the 3 bottles will have to do for now – let’s go!

Nose: On the nose of the standard expression there’s sweet caramel, vanilla, a touch of baking spices, faint dark fruit and earthy rye.

Finish: The finish is long and spicy with caramel and green grassy/apple rye notes flashing through again before fading to a flavourful aftertaste of oak spice and earthy rye.

Overall: This little piggy makes for a great rye whiskey. Everything you could want is there. You get sweet caramel and vanilla from the bourbon casks, green apples/grassy and white pepper spice notes from the rye, and a good dash of oak spice and char from the new oak to tie it all together. One my favourite things about this rye whiskey is that despite being 50 proof this never overwhelms the flavours or experience whilst you’re drinking it. 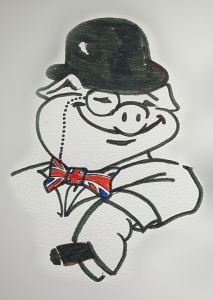 Nose: Already I can tell we’ve stepped things up a gear with this one! The nose gives intense caramel, earthy rye, vanilla bean, and white pepper.

Overall: This is an exceptional rye and I take my hat off to the palates of those who picked it. In this whiskey the proof also doesn’t overwhelm or burn but instead carries all those amazing flavours and adds to the overall spiciness. This is a very well-balanced rye whiskey and the rye flavours hold the upper hand throughout. Many of the flavours we saw in the standard WhistlePig are here but for me the rye plays a much bigger part and makes this pour a spice and flavour powerhouse.

Nose: The nose opens with a dominant green grassy rye note, with burnt caramel, slight vanilla and a brief touch of furniture polish.

Finish: The finish is warm again with notes of deep caramel with subdued white pepper  and a slightly minty oak aftertaste.

Overall: Hedonism Wines’ spirits buyer Ben Murray truly picked a very hedonistic barrel! This whiskey is a pleasure from start to finish and tastes like it could be a much older rye than what we’ve seen so far. There’s an incredible depth of flavours with an undertone of old minty barrels that reminds me of an older rye such as Sazerac 18. In this single barrel the age and complexity of the whiskey and the oak barrel is more prominent. The people at Hedonism clearly know what makes a good rye and this barrel proves that point exceptionally.

Overall: It probably goes without saying, but if you think standard WhistlePig is good then I can assure that at barrel strength it is even better. This review was never supposed to be a ‘which one wins’ review but instead aimed to explore the similarities and differences between these two single barrels and the standard WhistlePig 10. Both the British Bourbon Society and Hedonism picked exceptional barrels, and each is so unique that to say one dominates the other would be doing a disservice to the other. Both barrels have taken separate elements of the standard WhistlePig 10 profile and amplified them in their own unique way. To me the British Bourbon society bottle features a very flavourful rye with plenty of sweetness and spice, whereas the hedonism barrel features mature rye flavours with the age of the whiskey shining through more. One thing they have in common with each other and the standard WhistlePig 10 is that regardless of what the proof seems to be you never get a distinct alcohol burn. Instead the alcohol always carries those delicious rye flavours so instead of a massive burn what you get is a massive increase in the potency of the flavours.

The good news is although a majority of the British Bourbon Society’s barrel ended up in the hands of its members there are several bars in the UK which stock it by the pour for a decent price (see list at the bottom of the page). Further good news is that bottles of the Hedonism WhistlePig 10 single barrel are still in stock both in store and online and I cannot recommend this single barrel highly enough.

WhistlePig have played their cards very well by allowing whiskey groups and retailers to purchase single barrels of their rye whiskey. I’m always of the opinion that you can blend away a sub-par whiskey but at barrel proof your whiskey either sinks or swims – and these little piggies swim and at some speed.

It’s also great to see an increased number of single barrel American Whiskies make their way into the UK, for what is a very thirsty market, and I hope the arrival of these two barrels signals the start of something we can expect to see again in 2018 – more single barrel WhistlePig 10 picks

BUY BUY BUY! I love a good rye and these instantly shot up the list for me of the best ryes I’ve had the pleasure of tasting. Unfortunately only the Hedonism WhistlePig 10 is actually available at retail for rye whiskey lovers but it’s in no way a consolation prize! For a taste of the British Bourbon Society WhistlePig 10 why not head to either Milroy’s of Soho (London), The Lexington (London), Northern Craft House (Manchester), or The Melody Restaurant (London) where you can buy it by the pour!