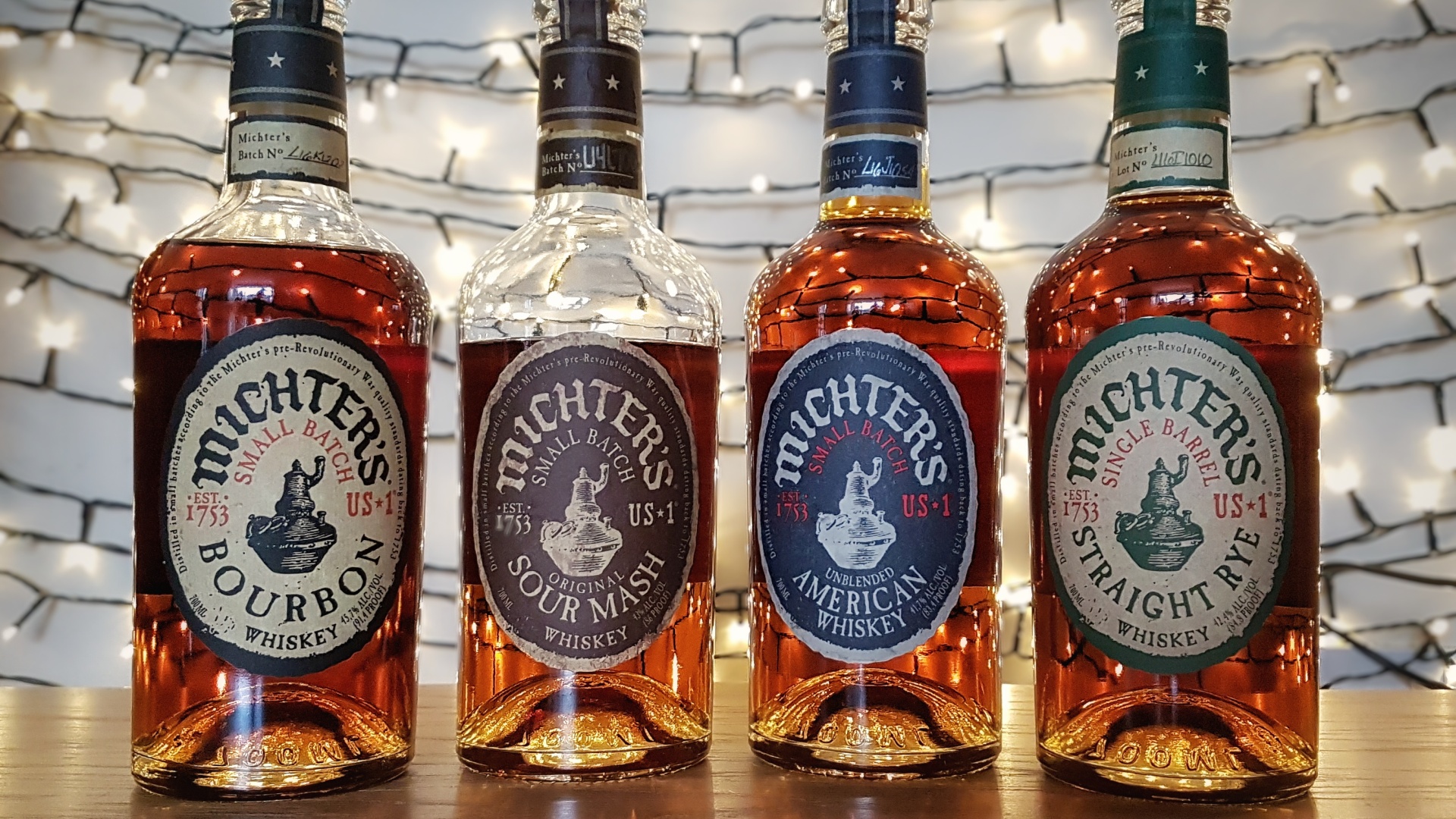 In today’s whiskey boom it’s often hard to find a whiskey producer with whiskies that are not just good, but also come in the style of whiskey that you prefer, be it bourbon, rye, or just good ole American whiskey. It seems that every time you find somewhere with a decent selection, the shelves are usually struggling under the weight of bottles from here, there, and everywhere with each label promising your taste buds an authentic and quality pour with centuries of tradition. So which do you choose? How do you separate the real quality whiskies from the bland whiskies? These questions, unfortunately, are not easily answered. This being said, sometimes you get lucky and find a brand or distillery which consistently hits the mark across the board and for me one such brand is the Michter’s Distillery. With distribution of new brands constantly on the up it’s no surprise to me that Michter’s whiskies seem to be consistently getting more popular with wider distribution outside the US.

Already well known for their sought after and limited premium aged whiskies, their flagship US☆1 label offers probably the most diverse selection of quality whiskies bottled under one label on the market. This range is made up of four core whiskies and a number of limited release offerings. Today I’ll be taking a look at the four core whiskies in this range: Michter’s Small Batch Bourbon, Michter’s Small Batch Sour Mash Whiskey, Michter’s Unblended American Whiskey, and Michter’s Single Barrel Rye. To date all these whiskies have been either sourced or contract distilled by Michter’s from unknown distilleries. However, after 3 years of tweaking their equipment Michter’s started barreling their own distillate at an entry proof of 103 in late August 2015. Another important piece of information is around the use of the term ‘Small Batch’ on the labels of Michter’s whiskies. As many whiskey geeks will know there is no legal definition of what exactly a ‘small batch’ is and it could be just 2 barrels, or it could be 200. With Michter’s, Small Batch means approximately 20 full barrels as that’s the maximum capacity of their batching machinery.

My hope in reviewing the entire range at once is to provide a one-stop-shop post for those who are looking for more information on this range or wondering which of the four whiskies would be the best place for them to start. I hope to also do a similar post on their range of limited release offerings under the US☆1 label as soon as I source a sample of the barrel proof bourbon- so watch this space! Now onto the reason we’re all here… 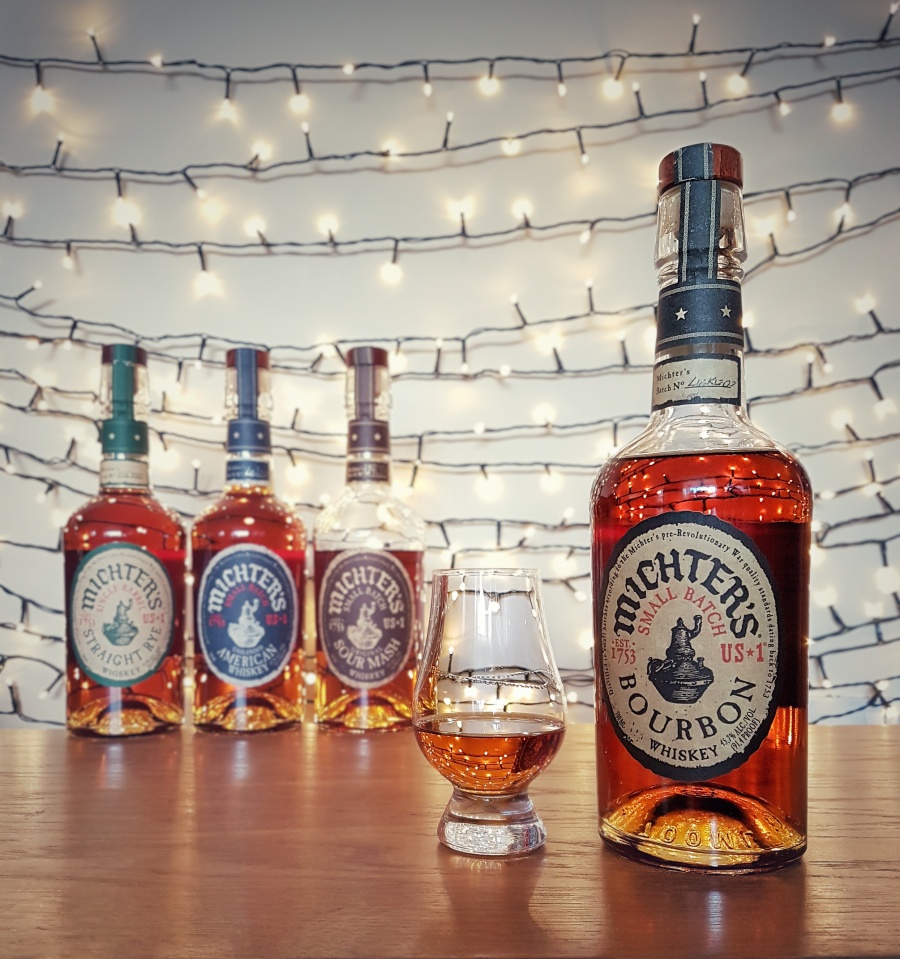 Finish: The finish is a medium length with intense caramel and a warming oak spiciness that leaves an aftertaste of toasted oak tannins.

Overall: This bourbon smells amazing and the influence from ageing in Michter’s own toasted barrels is very apparent but not overwhelming. As this pour rolls around the tongue it is as if flavour is oozing from every drop and makes me think that Michter’s low barrel entry proof (103) isn’t so strange after all. The longer I chew it the more flavors emerge and the whole pour reminds me of warm Christmas cake covered in a thick toffee sauce and topped with roast peanuts – delicious! The proofing I feel is perfect as there is no overwhelming alcohol. This makes it a lot easier to enjoy those classic bourbon flavors. 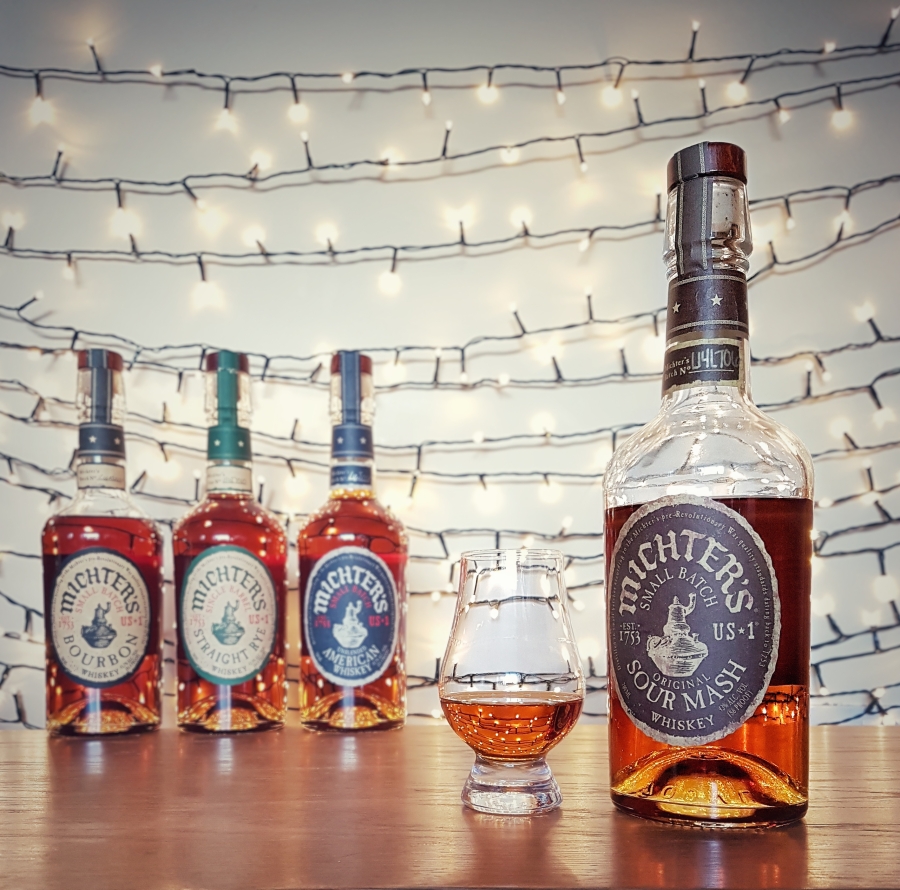 Palate: The palate is viscous again starting with sweet caramel and floral vanilla that this quickly gives way to dark fruits and a healthy dose of white pepper, baking spices, red apples, earthy rye, and oak that dries the tongue slightly.

Overall: This is one my favourite whiskies from the US☆1 range because of the complex and flavourful nature. Rumour has it that the mashbill for this whiskey doesn’t contain the legally required 51% of corn to qualify it as a bourbon and instead features an almost 50/50 split of corn and rye with a very small amount of malted barely to aid the fermentation. Regardless of this, I absolutely love it. The balance between the corn side and the rye side of the mashbill creates a fantastically complex pour that you can chew all day. 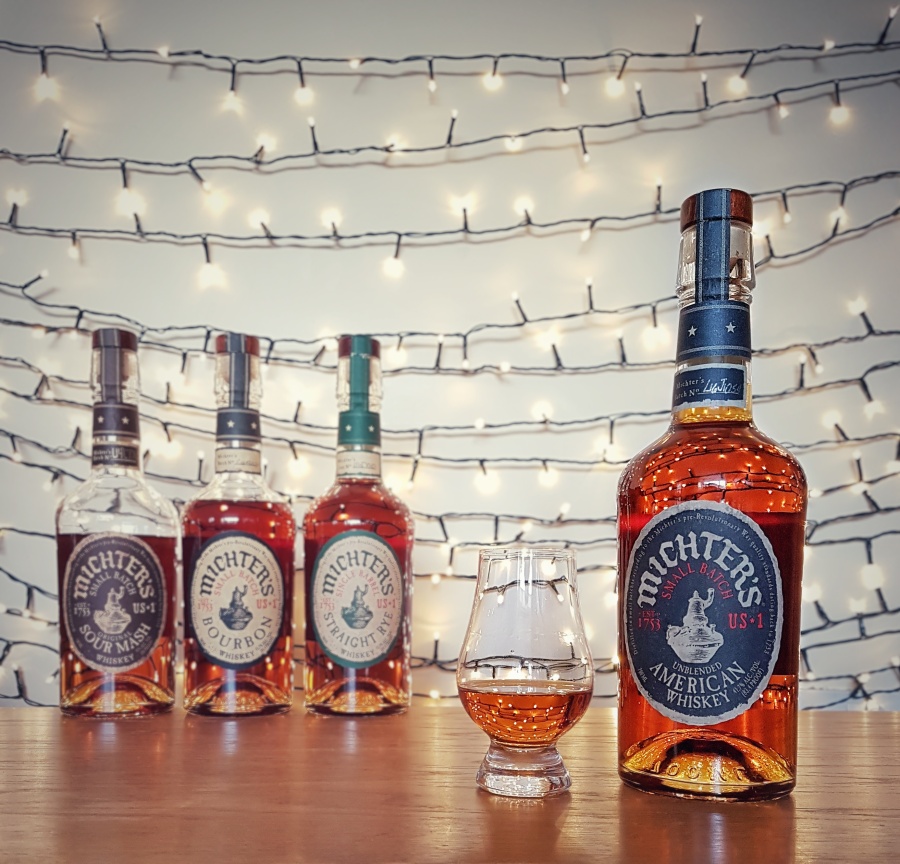 Nose: The nose opens with deep sweet caramel, toasted corn, and baking spices, which fades to dark fruits, vanilla bean, and a touch of cereal that reminds me of young rye.

Palate: The palate is light but viscous with sweet caramel, vanilla bean, young corn, and a touch of toasted oak spice to round it out.

Finish: The finish is medium length with sweet caramel and vanilla present again but also a nice warmth laced with baking spices and a touch of dry oak that leaves an aftertaste of dark fruit and cherries.

Overall: This a a great American whiskey and one I always have a bottle of in my cabinet. It’s light but flavourful taste makes it a perfect whiskey for those that want classic bourbon flavours with a softer approach. The reason it’s not classified as a bourbon is because it is aged in ex-bourbon barrels that are still bourbon soaked when filled with fresh distillate. The word ‘unblended’ on the label refers to the fact that this whiskey isn’t blended with neutral grain spirits before bottling as is usually the case. If you’re looking for a gateway whiskey into the American whiskey category look no further than this bottle as this can be enjoyed by novices and seasoned drinkers alike. 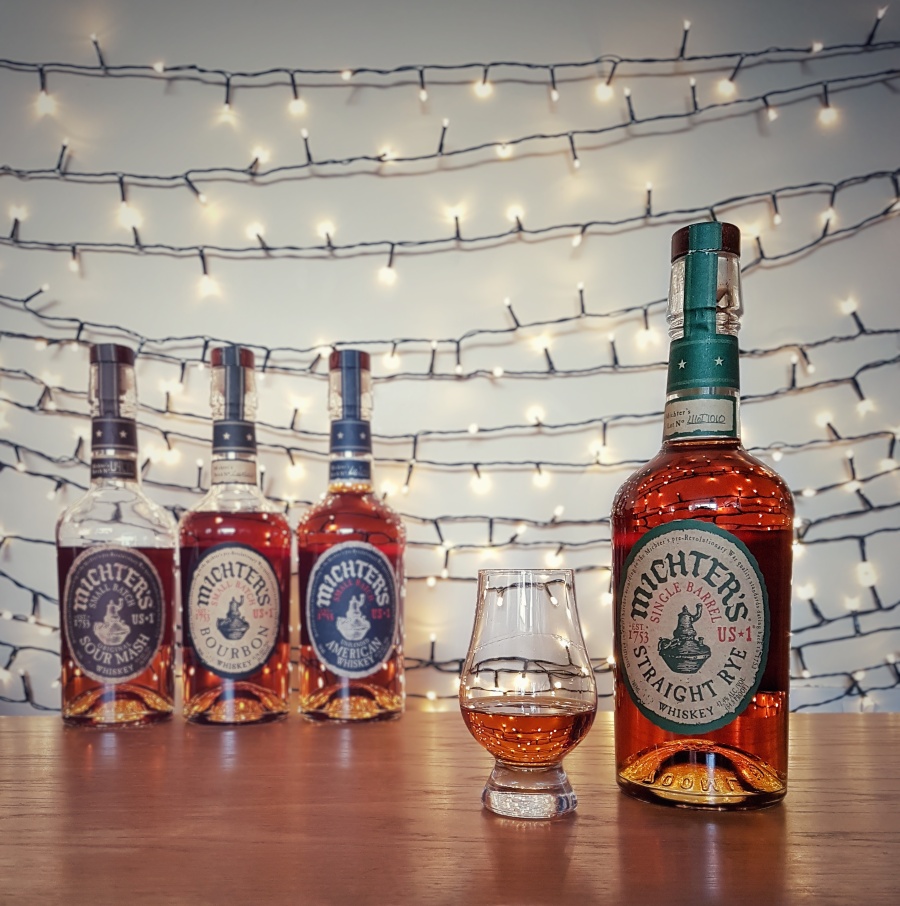 Finish: The finish is dry with white pepper again and a touch of green apples and oak tannins.

Overall: This a great example of a very well made Kentucky rye. Albeit a touch dry, and quite spicy (as a proper rye should be!), it never overwhelms the palate with its spice as many other rye whiskies tend to do. Instead it’s a perfect balance of rye’s green apple character, white pepper, a touch of tannins from the barrel, and the modest proof. An interesting element is that this is a single barrel offering which means there’s no hiding inferior whiskey behind good blending. As a flagship rye whiskey, Michter’s have truly set the bar very high with the level of quality you get and it fills my heart with joy that there’s a barrel proof release of this.

My final thoughts on the core Michter’s US☆1 range is that there really is a whiskey style to suit every palate. What Michter’s have created are very versatile and deeply flavourful whiskies that always offer their drinker a high-quality whiskey regardless of which expression they’re reaching for. One thing I noticed consistently across this range is that, despite 3 of the 4 whiskies being bottled at less than 90 proof, there are tonnes of flavour in these whiskies and none taste like they have been watered down at all. The only explanation I can find for this is the very low entry proof that Michter’s uses for these whiskies. At a lower entry proof the whiskey interacts better with the sugars and flavour compounds in the barrel whilst ageing (i.e. more flavors) and less water is also required at the end to reach the desired proof. There’s also less of the alcohol burn usually associated with whiskies that are as flavorful as these because of this. Overall, the results are a range of mellow yet flavourful whiskies that can be fully appreciated by both seasoned connoisseurs and American whiskey novices. Of the core range, the Sour Mash Whiskey is the star of the show for me with it’s complexity and flavours- but honestly the rest are really not that far behind it.

One Reply to “Michter’s US☆1 Range Review”